If polywell fusion is developed, in what ways will the world change for better or worse? Discuss.

Well you don't get 3g out of those engines though.. in my current tests i calculated with 2 x 6GW Reactors. At 1500s ISP they produce a thrust of ~1631 kN, so a bit over 0.5g for a 300ton ship. They burn, or rather heat 110kg of propellant per second. Thats almost 8 tons of propellant for just accelerating to 350 m/s and you need some additional energy for a climb to 8-10km altitude to avoid too high dynamic pressures. Also you loose some energy to drag. So i guess we're more looking at 10-15 tons propellant used to get to 350 m/s.
To compare that to ducted fans, i get about the same thrust with just 300-400MW shaft power with a total fan area of 16 m^2. Also they would probably not weigh so much more than the propellant saved by using them.
Also those fans would be more like axial compressors with a pressure ratio of about 1:4. They would sit in the airflow path to the QED engine and would benefit the pressure ratio of the engine up to about M2.8.

Heres a little pic i made for roughly illustrating the concept: 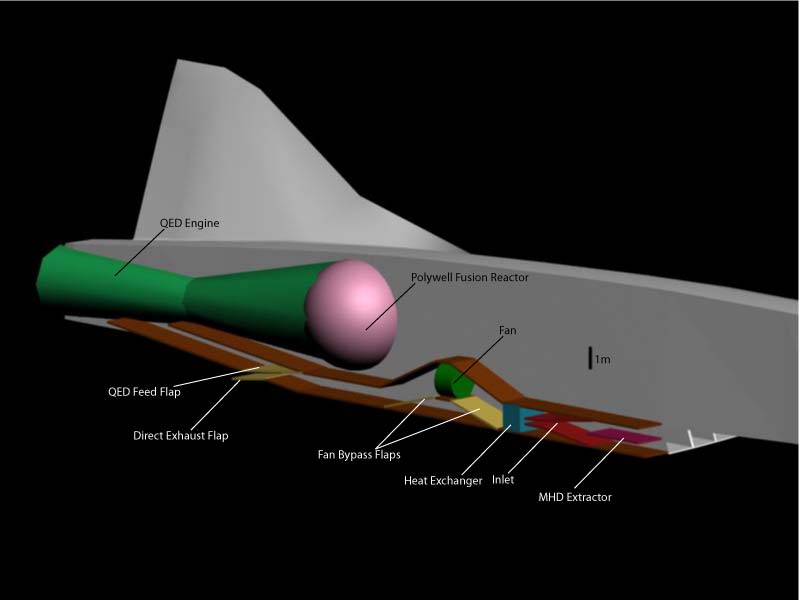 Its very basic but shows the general idea.

Oh, IMO forget "Rasterscan the underbody." Instead, scan the REB inside a "standard" (sc)ramjet engine tube. The forebody/diffuser locks forward for "pure" ARC mode, but retracts to allow airflow. Place the REB generator in the engine tube like the rocket engine in a "standard" RBCC.

Yep i thought something like that too.. just use the standard QED engine and feed it with air from a seperate inlet channel.. (see pic above)
Last edited by Mindblast on Thu Oct 08, 2009 11:59 am, edited 1 time in total.
Top

As far as I know, the SABRE precooler is still expected to work. A piece has been manufactured and demonstrated, and they've solved the icing problem.


And I really think some effort should be put into trying to burn the hot hydrogen exhaust productively, while it's still in the engine and can do some good. At least it should be able to effectively scavenge ozone from the REB-heated air coming down the ram duct...

I guess this would happen anyway if you mix Air and Hydrogen and blast a multiple GW REB into it. Don't know how the reaction equilibrium would be though as the stuff gets pretty hot. But this is probably a matter of nozzle efficiency then.

What i was trying to achieve in my concept is the ability to fly a cruise speed of Mach 4-5 without using any onboard propellant. This would give the spaceplane the nice ability to do a range flight prior to starting the acceleration for orbital velocities. Would be a nice feature for launch sites that can't access certain orbital inclinations because of their longitude.. i.e. insertion into a geostationary orbit from a non equatorial launch site and such..
Top

I don't know how suitable the SABRE precooler design is to heating a Mach 4 airflow. How much energy do you propose to bleed off with that MHD turbine?

Other than that, it seems like a decent idea to me... Dr. Bussard's SSTO design actually used conventional kerosene-fueled turbojets to get up to Mach 2...
Top

Well the MHD Extractor would probably not be used at all in cruise flight. I got the general inspiration to use such a device from this paper: http://gltrs.grc.nasa.gov/reports/2003/ ... 212612.pdf

Regarding the Heat Exchanger.. yes i guess directly using the SABRE heat exchanger to dump heat into an airstream that was slowed down from M4-5 would not be possible. I just took the general figures for how much surface area per square meter might be possible and then used the thermal wizard (http://www.thermal-wizard.com/tmwiz/) to calculate some heat transfer coefficients, saw the huge numbers and decided this might well be doable.

KitemanSA wrote:With a large subsonic tow plane and a Kinetics Interchange TEther (KITE) Launcher, you can get to several mach before you turn on your motor.

That may do for bulk cargo. I think it would be harder to get such a device man rated.