DeltaV wrote:Here's a screwball idea for high-voltage lift fans:
Hollow fan blades with slotted trailing edges, E-APE interiors (fed by air from the hub, which also provides HV and commutates the ionization laser) and airfoil exteriors. Conductive outer duct or a connected, rotating conductive ring to complete the circuit across a small gap to ground. It would need large blades (the best ones have a 'wavy' outer surface), so limited to low speeds.

Now, there is a way to curve the arcs (and in some cases, make them self-healing). That means the hollow fan blades can be smaller (higher rotational and vehicle speeds...)

For reference, here is a modern turbofan's business end, which would require a 3D (space curve) arc path (thus, phase mask generated Airy beams from each end) and varying elliptical (internal) sections along the blade length: 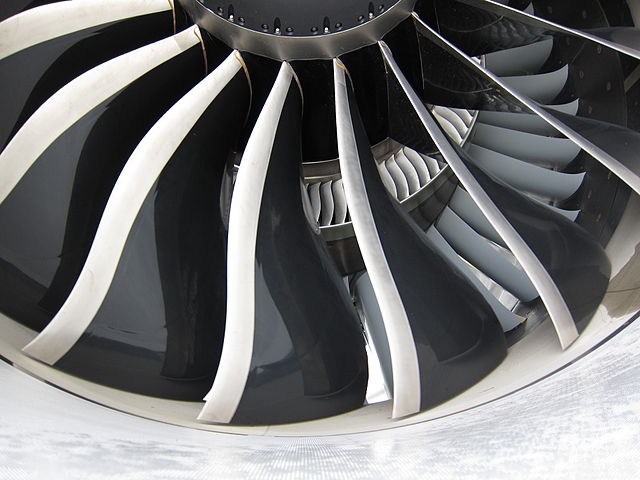 Due to blade twist and internal cross section area variation, the axial and tangential (apart from linear change in radial lever arm) contributions to the thrust vector and fan disk angular momentum by the shock waves leaving the curved exit slot would vary along the blade length. The outer sections have narrower ellipses and would converge the shock waves faster, while the sections near the blade roots would have fatter ellipses but also a smaller separation of foci, so it's not immediately obvious how the exhausted shock pulse would evolve in time.
Top

Re: Using atmosphere as propellant

We report the first experimental generation and observation of Airy beams of free electrons. The electron Airy beams are generated by diffraction of electrons through a nanoscale hologram, that imprints a cubic phase modulation on the beams’ transverse plane. We observed the spatial evolution dynamics of an arc-shaped, self accelerating and shape preserving electron Airy beams. We directly observed the ability of electrons to self-heal, restoring their original shape after passing an obstacle. This electromagnetic method opens up new avenues for steering electrons, like their photonic counterparts, since their wave packets can be imprinted with arbitrary shapes or trajectories. Furthermore, these beams can be easily manipulated using magnetic or electric potentials. It is also possible to efficiently self mix narrow beams having opposite signs of acceleration, hence obtaining a new type of electron interferometer.

Probably not useful for steering the REB in Bussard's propulsion scheme, since the high power would obliterate the hologram.

Maybe useful for electron injection upstream of the fusion process,
(a) as curved 'guide' beams for the straight e-beams injected into a symmetrical Polywell, or
(b) into geometrically-squashed or asymmetric coil-current Polywell variants, which would not always have straight field lines along all of the corner/face cusps.
Top
Post Reply
152 posts