?? This is the demo Dragon II capsule
Top

Very few official words at the moment, the following reconstruction of events is based on multiple but not official sources. On 20th April, at the Dragon test stand near Landing Zone-1 Cape Canaveral Air Force Station (CCAFS), SpaceX static and ground tested the Crew Dragon capsule C201, previously flown on CCtCap Demo Mission 1, ahead of its In Flight Abort test previously scheduled later this year. During the morning SpaceX succesfully tested the spacecraft's Draco maneuvering thrusters. Later the day SpaceX was preparing for a static firing if the capsule's Super Draco launch escape thrusters. At about T-9 seconds, SpaceX experienced a serious anomaly which resulted an explosive event and the total loss of the vehicle and the test equipment. Local reporters shortly reported an orange/red/brown coloured smoke plume, presumably caused by released toxic hypergolic fuel which is the propellant for the Super Draco engines. According to official words nobody injured and the released propellant was treated.

SpaceX released a short press release: "Earlier today, SpaceX conducted a series of engine tests on a Crew Dragon test vehicle on our test stand at Landing Zone 1 in Cape Canaveral, Florida. The initial tests completed successfully but the final test resulted in an anomaly on the test stand. Ensuring that our systems meet rigorous safety standards and detecting anomalies like this prior to flight are the main reason why we test. Our teams are investigating and working closely with our NASA partners."
I am not a nuclear physicist, but play one on the internet.
Top

There is a download on Google documents and you can reach the link on the Reddit space X forum that someone is broken down the explosion into 200 clips in PNG format. Detail is very grainy and unfortunately at the rate of explosion it only takes three frames to cover the entire craft. It is obvious the explosion started at the top of the craft and blew downward and outward. One frame shows a black object in front of the explosion shooting downward but that might be an anomaly in processing of the image. Hopefully they will have had is high-speed camera running at the time of the explosion in space X will know more although I doubt they will release any information about the mishap.
I am not a nuclear physicist, but play one on the internet.
Top

COPV episode 3? Does this use COPVs? Thread on Reddit suggested it did?
Top

The engines burn hypergolic propellants—monomethylhydrazine is the fuel while nitrogen tetroxide is the oxidizer. These are fairly toxic compounds, but unlike other "cleaner" rocket fuels, they are more easily storable both on the ground and in space. COPV seem to fail when exposed to cryogenic temperature due to the differences in the expansion rate of the liner verses the over wrap. I think these are stored at ambient temperature and tanks are pressurized with helium gas making the tanks less of a problem , These motor are designed for long term storage of propellant and armored around the motor to contain a motor explosion. So such a catastrophic failure that does point at the tanks and valving leaking before the event takes place.I can't imagine corrosive oxidizer was entirely to blame : Dragon has to be docked to the ISS for months on end, surely they wouldn't have overlooked that? Maybe something to do with sea water contamination, I just hope they had a high speed camera running as this one is going to be a bother to figure out what went wrong
I am not a nuclear physicist, but play one on the internet.
Top

Back to Apollo days :
Three of those failed while they were installed in the spacecraft, two during a system test, and one, of course, was Apollo 13, as everybody is probably familiar.
Others failed during acceptance or qualification tests due to:
Stress corrosion cracking from red nitrogen tetroxide
Weld cracks and embrittled weld repairs
Stress corrosion cracking from water (steel motor case)
Sustained load crack growth in water (growth of an existing crack due to exposure to water)
I am not a nuclear physicist, but play one on the internet.
Top

One final bit of info. SuperDraco is derived from Draco, and utilizes the same storable (non-cryogenic) propellant as the small Draco thrusters, but are over 100 times larger in terms of delivered thrust.
The Draco thrusters were tested earlier in the day
No conclusions or correlations just facts to consider.
I am not a nuclear physicist, but play one on the internet.
Top

@NASA statement from today: "SpaceX and NASA are just beginning the mishap investigation process. We don’t yet know what impact this will have to our target schedules. We have full confidence in SpaceX. Additional information will be released as it is available."
I am not a nuclear physicist, but play one on the internet.
Top

SpaceX Was Secretly Building a Second Starship in Florida 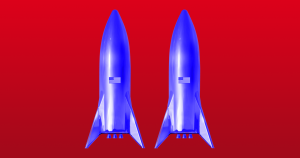 In a bid to reach the Moon as quickly as possible, SpaceX is building a second Starship.

The company is already building and testing one Starship in Texas, but decided to build another in Florida to determine which site is better suited for the task, according to Engadget. By developing a second construction site for Starships, SpaceX is effectively racing against itself to figure out the best way to bring crews and passengers up into orbit.

News broke of the second spacecraft after someone stumbled across the construction site and posted about it on a forum, per Engadget. In response, CEO Elon Musk took to Twitter and confirmed that SpaceX was building Starships in two different states.

Musk went on to explain that the two teams were competing to determine the best way to build Starships, but that they’re required to share insights with each other and that both sites may end up mass-producing the spacecraft in the future.

“Both sites will make many Starships,” Musk tweeted. “This is a competition to see which location is most effective. Answer might be both.”

Starlink conference call reports on Twitter right now. All I can say is "Holy Smokes!" Between Starlink and Starship, SpaceX is innovating at a pace that is unprecedented in the space business.
Top

Maui wrote:“Prior to this the idea was to decouple the legs from the wings. This wasn’t very aesthetic, so now we have 3 large legs/wings that actuate. It is slightly more risky because we are combining multiple functions together”

Don't care what you choose to fixate on, or details you care to invent for yourself. It is slightly more risky from the isolated standpoint of the fins alone, more jobs is more risk. It lowers risk from teh standpoint of the vehicle, because you dan't have a more complicated aeroshell

I heard a rumor that in simulation it showed hot gases were impinged on flight surfaces during descent.
I am not a nuclear physicist, but play one on the internet.
Top

The system would be a game changer for telecommunications and would provide SpaceX with an astonishing amount of revenue. How much revenue? A recent article in Next Big Future suggests that SpaceX could take in $40 billion a year, about twice the amount of NASA’s current annual budget. That number is comparable to what AT&T makes with Direct TV. What that extra shot of money will allow SpaceX to do is mind-boggling.

Elon Musk’s SpaceX recently launched the first 60 satellites to test the concept of what will eventually be a constellation of thousands of satellites that are designed to bring high-speed internet to every corner of the Earth. When the constellation is complete, sometime in the mid-2020s, SpaceX thinks it can provide wi-fi services that are competitive with fiber optic cable in urban areas as well as to currently underserved rural parts of the planet.

Each satellite is small, equipped with a single solar panel, a krypton-fueled ion drive, a collision avoidance system, and the wherewithal to receive and send high-speed Wi-Fi transmissions. With SpaceX’s family of reusable rockets, Elon Musk can deploy Starlink relatively cheaply, for about $10 billion, according to one estimate.

At the end of their useful lives, the satellites will use their ion thrusters to crash back into the Earth’s atmosphere, burning up, and thus preventing them from becoming space debris.


The system would be a game changer for telecommunications and would provide SpaceX with an astonishing amount of revenue. How much revenue? A recent article in Next Big Future suggests that SpaceX could take in $40 billion a year, about twice the amount of NASA’s current annual budget. That number is comparable to what AT&T makes with Direct TV. What that extra shot of money will allow SpaceX to do is mind-boggling.

Even considering that some part of that revenue will be used to maintain and upgrade the Starlink system, Musk will still have a lot to play with to fulfill his more ambitious dreams, such as starting a colony on Mars. Going to the moon would be the first step, to mine ice at the lunar poles and refine it into rocket fuel.

Moreover, unlike NASA, SpaceX will by and large not be answerable to politicians who hand out the money but apply conditions to funding and micromanage what the space agency can and cannot do. Currently, NASA is having difficulty persuading the Democratic-controlled House that it would be a good idea to pay a little extra money to land people on the moon by 2024. Congress cannot withhold money from SpaceX to stop Musk from going to Mars or back to the moon, for that matter. Current business-friendly commercial space legislation means that the government cannot stop SpaceX through regulatory gridlock, either.

If Congress continues to stonewall NASA’s plans to return astronauts to the moon, the United States `might find that the space agency will have been beaten back to the lunar surface not so much by the Chinese but by SpaceX. Those who think that the government has a role to play in space exploration may find this troublesome. Others, with a more libertarian bent, will likely consider the scenario of a private versus public space race a feature rather than a bug.

Of course, a cash-rich SpaceX conducting its own space program will not escape the notice of Elon Musk’s main business rival, Blue Origin’s Jeff Bezos. Bezos has his own ambitious space dreams, involving free-flying space colonies built with lunar and asteroid materials. He also already has a cash cow to finance space ventures called Amazon.com. A private race to the moon, Mars and beyond is something not envisioned outside the pages of science fiction, until now.

All in all, having NASA back to the moon with private companies such as SpaceX and Blue Origin as partners rather than competitors would be a much better scenario. Having a federal government presence on other worlds will provide not only a civilizing influence that includes protecting scientists’ interests as well as commercial players, it could provide a shield against encroachment by possibly hostile countries, such as China. The Chinese would not like sharing the moon with western businesses, NASA being present as well would restrain China from doing much about its dislike of sharing.

Of course, if the Chinese insist on being troublesome, hopefully, the Space Force will be available to make them think twice. Thus, government will not be an impediment to the commercial development of space, but a crucial part of ensuring it happens.

I hope it works out that way (StarLink giving Musk oodles of cash to play with). I'll be looking very closely at signing up once StarLink goes into service.
Top
Post Reply
2290 posts