If you read their clarification with the view that 'EMDrive' means Shawyer's device, it makes perfect sense. They are simply saying that they are testing their own technology.
Top

Ion drive being sent to ISS for testing

ion drive is not an EM-drive, is not even propellantless propulsion.
Top

If someone has already posted this my apologies:

Thanks, hadn't seen it yet. Took a quick skim.
Interesting approach. I liked that they did an on axis null run, as well as with atmosphere and without.
I would have maybe also done a reverse on axis null run, as well as both z-axis runs to be completely thorough in that regard.
The next test cycle would be interesting with a larger cavity, however, same drivers.
Then another with same cavity, however up the power.

This seems to be a win.
The development of atomic power, though it could confer unimaginable blessings on mankind, is something that is dreaded by the owners of coal mines and oil wells. (Hazlitt)
What I want to do is to look up C. . . . I call him the Forgotten Man. (Sumner)
Top

The results of NASA's tests on the 'impossible' EM Drive have been leaked, and they reveal that the controversial propulsion system really does work, and is capable of generating impressive thrust in a vacuum, even after error measurements have been accounted for.


http://www.sciencealert.com/leaked-nasa ... -does-work
‘What all the wise men promised has not happened, and what all the damned fools said would happen has come to pass.’
— Lord Melbourne —
Top

I'm not seeing a clear description of the RF feed physical arrangement. Is all the RF equipment on the force balance, or do we have to account for photon pressure inside feed lines?
The daylight is uncomfortably bright for eyes so long in the dark.
Top

That leak appears to be their 2015 paper that wasn't accepted. It still references the original frustum.
Top

US and Chinese governments are already testing out their own EmDrive devices on spacecraft, sources say. 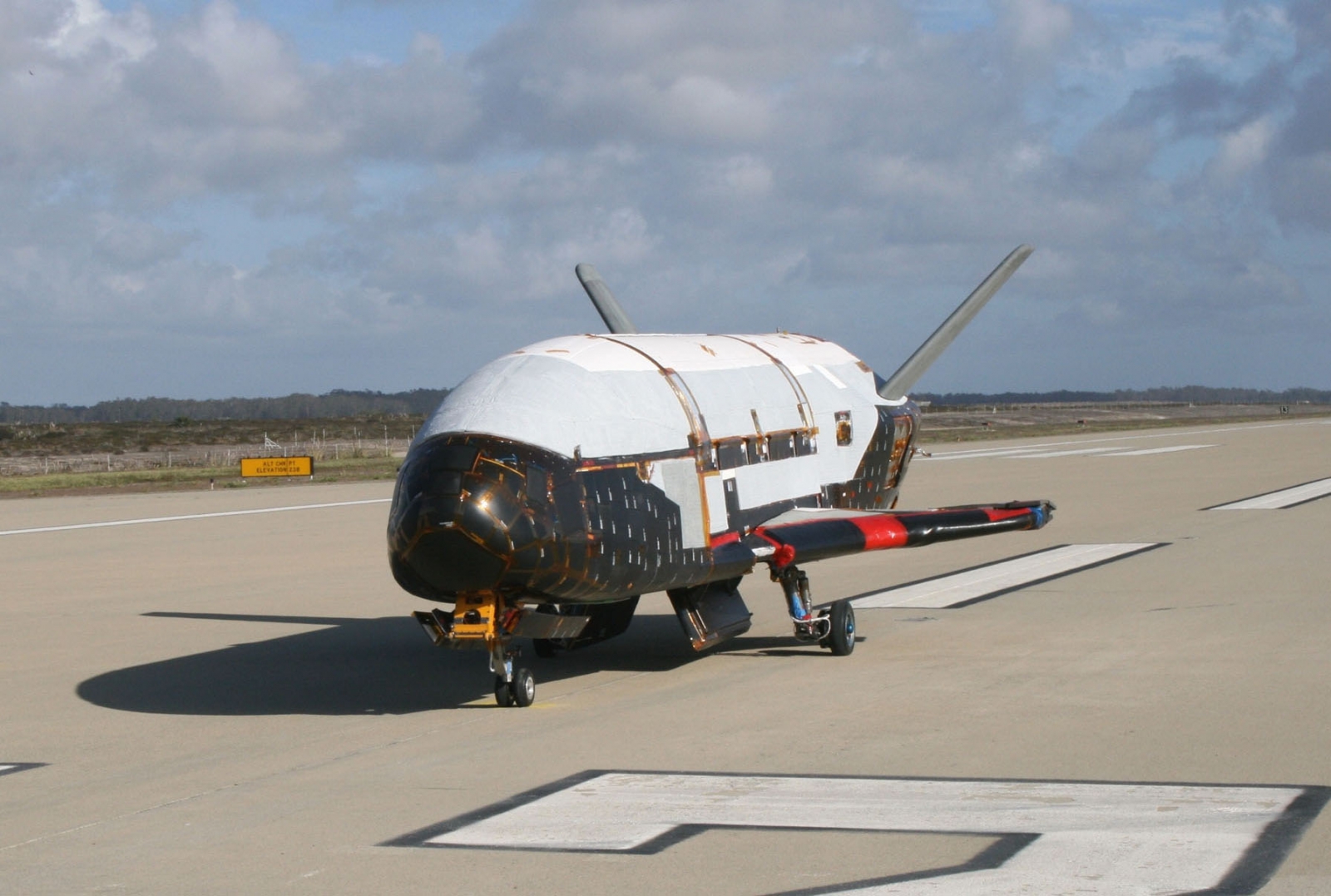 The US Air Force's X-37B autonomous experimental space plane, which is orbiting the Earth on a secret mission

The US Air Force and the Chinese government are presently trialling the controversial EmDrive space propulsion technology on spacecraft, according to sources in the international space industry.

IBTimes UK has been informed that the US Air Force is currently testing out a version of the EmDrive electromagnetic microwave thruster on the X-37B unmanned military space plane, while the Chinese government has made sure to include the EmDrive on its orbital space laboratory Tiangong-2.

The Boeing X-37 is a mysterious autonomous orbital test vehicle that is launched into low-Earth orbit using a launch vehicle just like a regular space rocket, but when it comes back to Earth, it re-enters the Earth's atmosphere in one piece and lands as a spaceplane.

The X-37B has been circling the Earth on a top-secret mission ever since it was launched by the US Air Force on 20 May 2015, and no one knows what exactly it is monitoring or when it will return.

All we know is that the current robotic spacecraft in orbit – the OTV-4 – is solar-powered and carries a large experiment bay taking up about a third of the space plane. This is where the US Air Force installs sensors and experimental technologies it wants to test out. If the US Air Force is testing out the EmDrive, this would make sense as the US military maintains that the X-37B is being used to "explore reusable space vehicle technologies in support of long-term objectives".

As for the Tiangong-2, it is a space laboratory that China launched into space on 15 September aboard a Long March 2F rocket. It is not designed to be a permanent orbital station, but is instead a testbed for key technologies that China wants to use on its large modular space station, which is set to launch in 2023.

The Tiangong-2 is big enough for two astronauts to carry out experiments in it and carries 30 days of life support resources aboard it. The space laboratory measures 10.4m in length and has a diameter of 4.2m. On 18 October, the Shenzhou 11 manned spaceflight carrying Commander Jing Haipeng and Chen Dong docked with the Tiangong-2 on 18 October at an altitude of 393km. Jing and Chen will spend 30 days in space conducting various experiments using the Tiangong-2

Scientists from the Northwestern Polytechnical University (NWPU) in Xi'an, China were one of the first in the world to try to build their own version of the EmDrive in 2008, and between 2012 and 2014 they published a series of papers reporting that they had measured net thrust.

However in 2014, they found that the thrust measured was a false positive experimental error due to a power cable, and when they revised the study with an improved EmDrive prototype, they found that any possible thrust being emitted by the device was far too small for their laboratory setup to measure.

Nevertheless, this does not mean that the Chinese have lost interest in EmDrive technology – and it would make sense for the microwave thruster to be included as one of the new technologies that need to be verified.

After all, in October EmDrive inventor Roger Shawyer confirmed that the UK Ministry of Defence and the US Department of Defense are interested in using the EmDrive to power space satellites, because a propellant-less rocket engine would enable the military to get close to a target without anyone knowing it was there.

In the meantime Roger Shawyer is patenting a new EmDrive thruster that features a single flat superconducting plate on one end, while the other end is a unique shaped plate that is non-superconducting.

He plans to manufacture thousands of the devices as part of his joint venture with UK aerospace firm Gilo Industries Group, and hopes that the EmDrive can be used to reduce the cost and time to space, as well as powering flying cars and helping to solve the global energy crisis.

That article is strong in speculation, weak in evidence. As far as I understand it, the thruster that China is testing is an Ion Thruster. I can see how one could get confused when writing this piece. Also, we know unequivocally that the X37B is testing a hall thruster at the moment. Once again, I can see how the author could confuse the two concepts. As far as I can tell, this whole thing looks like a series of rumors started by a guy over at NSF although I hope I'm wrong about that. He posted a few weeks back making all these claims and then this article which matches perfectly with his claims appears. Peculiar timing for sure.
Top

Well folks, looks like the "leaked" paper and all the rumors have been sourced to an NSF member that goes by the name "TheTravellerReturns." This particular NSF user has a history of rage-quitting their forum only to come back. Has denied he was the source, although that denial is hard to refute now that Ibtimes has outed him as the original articles source. Has spread untrue/fantastical rumors about the testing of the EmDrive on various rockets. I find this type of behavior appalling. This does not bode well for the EmDrive community.
Top

ScottL wrote:Well folks, looks like the "leaked" paper and all the rumors have been sourced to an NSF member that goes by the name "TheTravellerReturns." This particular NSF user has a history of rage-quitting their forum only to come back. Has denied he was the source, although that denial is hard to refute now that Ibtimes has outed him as the original articles source. Has spread untrue/fantastical rumors about the testing of the EmDrive on various rockets. I find this type of behavior appalling. This does not bode well for the EmDrive community.

There are some people who feel that what they want to believe is so compelling, they must force it to become the truth by their own actions.


Usually these sorts of people are in politics, but there has been recent upsurge in this reality warping behavior in many disciplines, even science. Global Warming comes to mind.


I would like for propellent-less drive to be a real thing, but i'm not going to lie to myself or others in a futile effort to make it happen.
‘What all the wise men promised has not happened, and what all the damned fools said would happen has come to pass.’
— Lord Melbourne —
Top
Post Reply
711 posts